A review of Pam Fox’s illustrated talk and book event: The Jewish Community of Golders Green 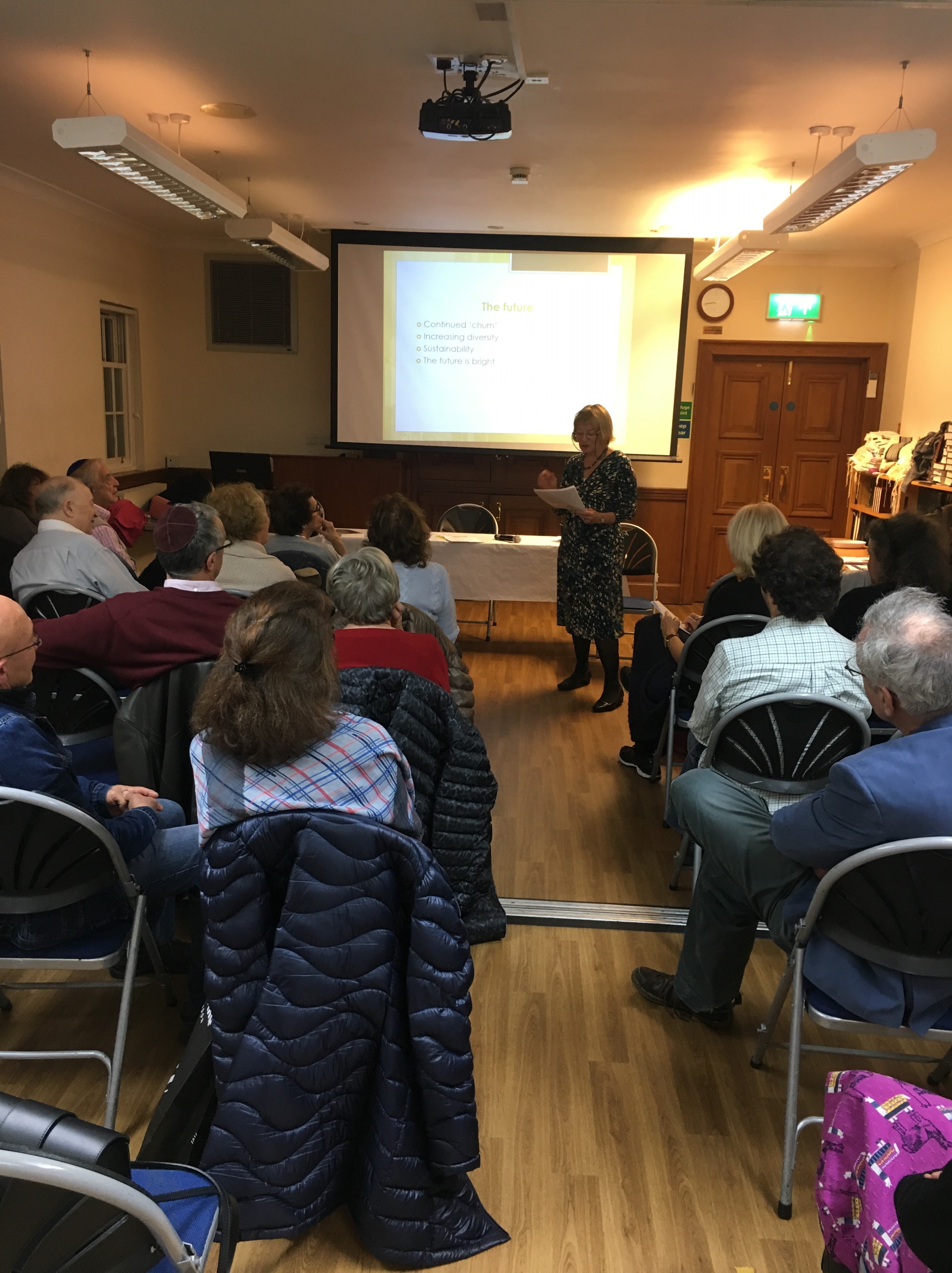 The Jewish Community of Golders Green - A Talk by Pam Fox

Having spent much of my life either living or working in Golders Green, I was fascinated by the talk given by Pam Fox for Spiro Ark recently.  Pam Fox has studied the Jewish people of Golders Green – she interviewed many locals, and pored over censuses and old phone books. She has now published a book, “The Jewish Community of Golders Green: A Social History” and she spoke to us about her findings.

The picture that remains in my head from the evening was of the Green itself.  Golders Green was originally an open space or ‘green’ named after a Mr Golders (Godyere, according to Wikipedia) who owned the land. The picture showed a view from the crossroads in Golders Green (where the clock tower now stands) looking towards the Church in Hoop Lane.  And that is all that was in the photo – green fields, and the Church – as late as 1904! The Jewish cemetery had been established in Hoop Lane, and the Crematorium was also built there. But very few people lived in Golders Green. Then the underground station was completed in 1907, new houses were built and the population of Golders Green grew rapidly in response. Many of the new inhabitants of the area were Jews. The first synagogue to open was the one in Dunstan Road, and the Munks Shul soon followed, serving the continental Jews.  Apparently there are now 40 synagogues in the area.

Pam Fox talked about the different types of people who settled – EastEnders who’d done well, tailors, butchers, cabinet makers, and they settled in West Heath Road. Business flourished for bettering themselves such as dancing schools, and elocution classes. Various decades had their own ‘flavour’ of people moving to the area.

At one time, Golders Green was very continental, with pavement cafes and smart clothing shops. At it’s height of popularity in the 60s and 70s there were no less than 14 shoe shops in Golders Green Road.

Over the years Jewish people have come from Austria, Hungary, Sephardi Jews from Calcutta, Egypt, Iran and Iraq. Holocaust survivors, Israelis, Haredi communities all arrived at various times. South Africans fleeing the political situation arrived and now make up 10% of the congregation at Alyth Gardens.

Many people in the audience knew of Doctor Shlomo Adler, the son of a doctor, who had come over as a refugee, and his son continues to practice in the area.

And Jews started leaving the area too. Some left to make Aliyah in Israel, others to move out to Bushey and Radlett, where they could have bigger properties for their young families. And people started coming back to the area too.

Pam Fox gave us her insights on which people came and went and the factors influencing these movements. She encouraged the audience to offer their opinions and ask questions throughout the evening.

Pam Fox read extracts from her book, and talked of personalities such as Dannie Abse and Simon Schama who had lived in the area.  After the talk there was time for people to chat and reminisce. Nitza told a lovely story about local policemen being trained to understand the Jewish ways. When asked what the word ‘Jewish’ conjured up for them, some said food, some said family, but almost all said ‘an inability to park!’

Overall it was a very interesting and enjoyable evening!