Chochmah, (i.e.wisdom).  That was the reason why he concealed a cross-section of the human brain within his composition.  He concealed only the right hemisphere of the brain, as the Kabbalah claims that the wisdom of man is connected only to the right hemisphere and not to the entire brain.  He also included a woman in the centre (to symbolise wisdom) and other Kabbalistic symbols like the cryptic entanglement of the cherubs around the image of the Lord.

This “muddle” meant to express the Kabbalistic term: “Mocha Stimah”, i.e. The Hidden Brain, which is the mysterious rational of the Lord that is beyond our understanding.  It is also called “Chochma Nisteret”, i.e. The Concealed Wisdom of 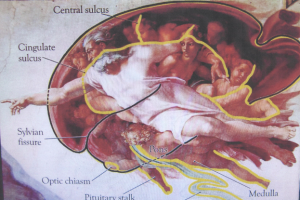 The Kabbalah teaches that the “Hidden Brain” (or “The Concealed Wisdom”) is the means by which God ignites in us the will to create: design, build, programme, compose, teach, sculpt, paint etc…. It is the source of our motivation to imitate the creator and fill the world with purpose and meaning.

The Kabbalah also teaches that these inspirations are passed to us via two sets of emotions:

Our sages also teach that we receive blessing and benedictions via the left arm since its blood vessels lead directly to the heart (for this purpose we wear the Tefillin on our left arm).

This is also the reason why the creator was depicted touching Adam in his left arm.  His is blessing him with talents and abilities to be able to create and fill the world with everything virtuous and sublime.