In case you have not heard of Raoul Wallenberg before here is some interesting information about this amazing man:

After the occupation of Hungary on March 19, 1944, the Swedish delegation launched a rescue operation 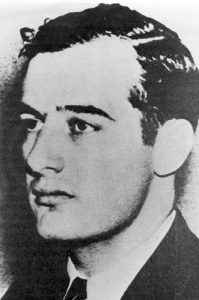 to save Jews from being deported to the death camps. The newly created American War Refugee Board decided to work with the Swedish government in order to help Hungary’s Jews. Soon the Swedish legation in Budapest reported that they were under enormous pressure of Jews seeking protection in the form of passports or visas. They asked to send a special envoy whose principal task would be to deal with passports. It was decided to appoint Raoul Wallenberg as secretary in the Swedish Embassy in Budapest with full diplomatic privileges. Before leaving, Wallenberg asked to be given a free hand and authorization to meet with Hungary’s leaders.

Wallenberg was born in 1912 to a prominent aristocratic banking family. He studied architecture in the United States before joining his family’s business. In the early 1940’s he made several business trips to Nazi occupied countries, including Hungary. This made him become a witness to Nazi Germany’s policies.

Wallenberg arrived in the Hungarian capital on 9 July 1944 with a list of Jews whom he was to help and 650 protective passports for Jews who had some connection with Sweden. However he soon widened the scope of his work and began to issue thousands of protective letters and to purchase houses which he put under the Swedish flag thus making them ex-territorial, and where he housed Jews for extra protection. The protective letter authorized its holder to travel to Sweden or to any of the other country Sweden represented. About 4,500 Jews had these papers, which protected them from forced labor and exempted them from wearing the yellow star.

In October 1944, the situation in Budapest took a turn for the worse. Although the Red Army was already approaching, the fascist “Arrow Cross” seized power and established a reign of terror. Jews were being killed in the streets; others were dragged to the Danube river where they were shot or drowned in the freezing water. The number of Jews with protective papers quickly rose. Wallenberg used unconventional methods, including bribery and blackmail, in order to finance and run his huge rescue operation. He soon employed approximately 340 people in his office. In view of the grave situation, he began to issue protective papers without distinction, and had 32 buildings protected by Sweden, with 2 hospitals, and a soup kitchen. Wallenberg together with other legations and international organizations set up the international ghetto, protected by the neutral countries. Jewish youngsters who looked “Aryan” served as guards; some of them were especially bold and wore “Arrow Cross” uniforms.