GAME OVER – A DOCUMENTARY DIRECTED BY EMMANUEL ROSEN

GAME OVER – A DOCUMENTARY DIRECTED BY EMMANUEL ROSEN 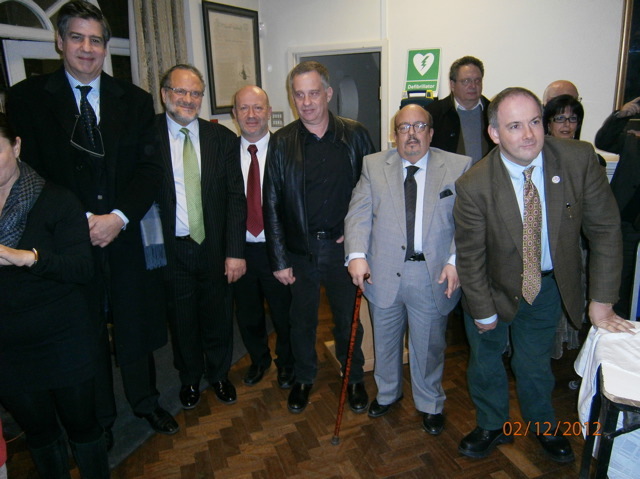 "Game Over" - 02/12/2012
A memorable event was organised last week by the organisation, "Justice for Jews from Arab Countries", in partnership with the Spiro Ark & the Spanish and Portuguese Synagogue in Maida Vale. The hall was full to capacity with some people having to stand.

The documentary "Game Over", directed by Emmanuel Rosen, the Israeli Journalist and Media personality plus members of his crew also attended the screening. The film was made in July 2012 exactly a year after the fall of Gaddafi.

"Game Over" documents Raphael Luzon, Chairman of the Libyan Jews Organisation, returning to his birthplace in Benghazi. This journey was a result of the hopes that the Spring of the Arab Nations inspired worldwide. However, soon enough the hopeful nostalgic journey became a nightmare when he was arrested and freed only after Italian intervention, when he was able to leave the country.

We had the honour of hosting a beautiful, extremely intelligent and courageous Libyan lady who threw light from her personal experience on the sad current situation in Libya. One of the most moving moments in the film was the scene with Sara Mahadiyeh an old Jewish woman, who was kidnaped by Muslims at the age of 16 and was forcely converted to Islam. Her family forbade even mentioning her name after her disappearance and she lived her life in total isolation. She is surrounded by children, grandchildren and even great-grandchildren who never new of her Jewish background.

When the film crew found Sara and interviewed her on screen, the only thing, she wanted to know was about her large family now living in Israel. The climax of the meeting was when she was asked if she still remembered her "Shema" prayer (apparently reciting it secretly on a daily basis) she bursted out crying bitterly.

I noticed that many members of the audience were crying together with her.

With the introduction of Edwin Shuker emphasising the question of Jewish refugees from Arab countries and the presentation of MP Robert Halfon, Raphael Luzon relived with us his experiences during his recent visit to Libya and with the talk of Majdoleen we had a true picture of Libya past and present.
It was an extremely successful event in which Jews, Christians, Kurds and Muslims shared a yearning for a better world to replace the current disturbing situation.

The Spiro Ark feels privileged to have been involved in such a memorable event.

The people who participated were: