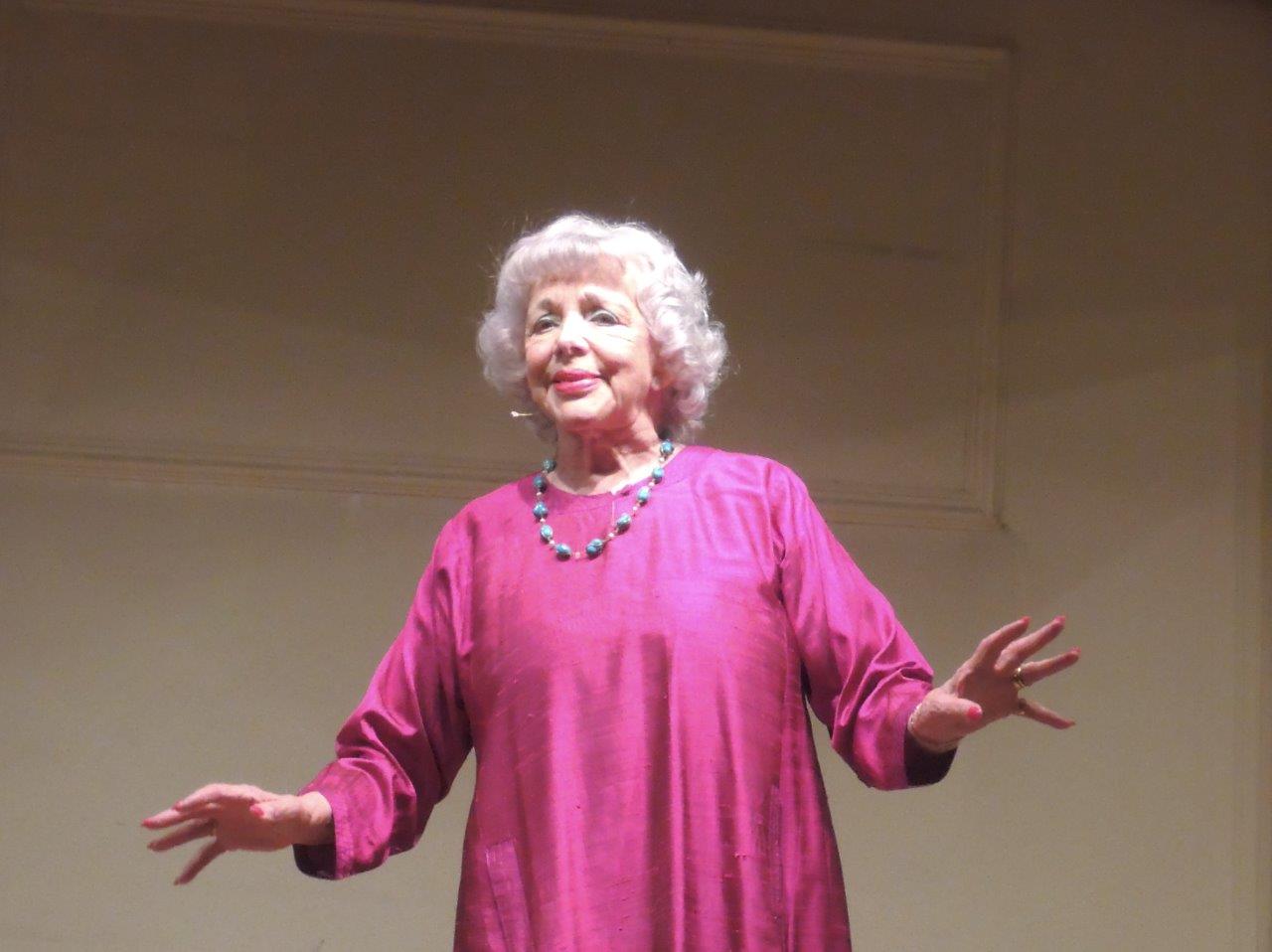 Thelma Ruby’s one-woman show was far more than an evening of songs. It was at once an illustrated history of twentieth century musical theatre, a glimpse of a life adventurously-lived and a love letter to theatre as an art form.

Thelma Ruby’s mother, Paula Ruby, was also a musical actress –Thelma touchingly adopted the stage surname of her retired mother, when it was made clear to her at her first hire that her surname Wigoder would never do. The rich and varied careers of Paula and Thelma Ruby spanned most of the twentieth century. By judiciously sampling songs they performed, Thelma Ruby took us on a journey that charted the evolution of popular music from the Edwardian period, when it was firmly within the Victorian music hall and variety tradition, via the interwar golden years of revue shows, to their last blast at the end of the 50s, to the musicals from America (almost all written by Jews, of course) that eclipsed them.

Along the way we heard some old favourites, like Noel Coward’s A Room With A View – Paula Ruby starred in 1928 in Coward’s hit revue This Year of Grace in which that air first.. got an airing –  but others, especially among the earlier numbers, were unfamiliar and to be introduced to neglected treasures from the musical theatre is a rare treat indeed. Ruby performed all the songs, in turn comic or touching, with great gusto, the veteran performer displaying an accomplished awareness of how to modulate a more mature voice, with expert phrasing, emotionally-potent, gravelly diction, and perfect timing in her gestures.

Did I say one-woman show? Well it was also a one-man show, as Thelma Ruby was accompanied on the piano by the adept and versatile Jason Carr. Carr was also roped into playing Thelma’s silent straight man in a fast and hilarious verse sketch – an even rarer species to get a public performance – from a late 50s revue called For Amusement Only about a woman who does not let her dining companion get a word in edgeways. It demonstrated the glittering potential of a whimsical comic genre that was killed off while still in its prime by the emergence of the absurdist and far more political satire in the Beyond the Fringe vein.

The evening was peppered with fascinating and often hilarious anecdotes as, inbetween songs, Thelma sketched out her life story.

Evidently attuned to her audience, Thelma Ruby opened with a mock-wistful number (apparently written for but never performed by Hermione Gingold) dreaming of ‘a small abode in Golders Green’ but the singer was actually born (of Litvak stock) and brought up not in London but Leeds. As a child she harboured a secret longing to be an actress, but, like so many people, it was the war that gave her the opportunity to pursue what might otherwise have remained a dream. She and her mother were evacuated to New York, where she studied at a college that offered drama. On returning to London in 1944 and eligible to be called up to do war work, she was determined to try and use her talents, so walked into Drury Lane Theatre, the headquarters of ENSA, the army entertainment corps. She showcased her abilities by singing a number from Oklahoma, which she knew from New York but had not yet reached London. She was immediately taken on (the occasion of the aforementioned name change) and spent the rest of the war as the comic girl character in a small troupe entertaining troops, often horrifically-injured servicemen recuperating in hospital.

Despite the success of that rendition from Oklahoma, Thelma Ruby for a long time saw herself as an actress rather than a singer, and after the war entered rep theatre – she gave a gripping account of the logistics of preparing a play in a week, while acting in another one. She went on to bigger things, including playing Goneril in Jonathan Miller’s King Lear and Mistress Quickly opposite Orson Welles’s Falstaff in a combined version of both parts of Henry IV (called Chimes at Midnight). But it was only when she was cast as Prince Charming in pantomime at Hull that she took on a singing role. Thereafter she does not seem to have looked back,  going on to create formidable characters such as Golda in Fiddler on the Roof opposite Topol – we were treated to a moving version of Sunrise, Sunset – and Fraulein Schneider in Cabaret with Judi Dench. She semi-retired from the stage when, in Israel, she met and married the Canadian-born left wing theatre director and Spanish civil war veteran, Peter Frye, who had moved to Israel when his New York career was cut short by McCarthy’s blacklisting. Later they toured the world with a two-person play about the life of Golda Meir (who endorsed it with the sole proviso that Ruby should not stoop to portray the diminiutive stateswoman  when playing her, as another actress had done, because, insisted Meir, “I don’t stoop”); their more memorable performances, Ruby movingly recounted, included for an all-black audience in segregated South Africa and clandestinely for refuseniks in a flat in Moscow.

These vignettes served as vivid illustrations of a theme Thelma had raised earlier in the evening when she made a passionate and powerful argument for theatre as a moral force – whether Shakespeare or musical revue. It is so because it aims to have an emotional and intellectual effect on its audience, to change them in some way, often through “the shock of recognition”, as Thelma put it. “When I go to the theatre… I want to know more, I want to feel more, I want to understand more.” Nowhere, she declared, is life crystallised as it is on a theatre stage. This reviewer, for one, agrees. Each performance, never repeated in exactly the same way again, is, mysteriously but truly, a communion between actors and audience. It would be easy to dismiss musical theatre as frivolity, but the luxury of frivolity itself is a moral good. The occult power to lift people’s spirits and influence their moods should therefore be considered, certainly by those involved in its production, on some level with the utmost seriousness. Because if that is neglected then everybody might as well go home.  Thelma Ruby’s rousing peroration on the topic was a clarion call for anybody with a love for theatre in an era when such matters are discussed far too little.

But even a dynamo like Ruby needs encouragement and it gave the evening an extra piquancy to learn, delightfully, that the genesis of her one-woman show came during a Spiro cultural expedition to Morocco she went on many moons ago, when Nitza Spiro coaxed her into putting on an impromptu evening’s performance at the end of the trip. That seed developed into the show she has been touring the world with ever since, so in treating us to her delectable and nostalgic musical potpourri she was coming full circle.

All in all, the entertaining evening served as a compelling reminder that, now the creative outpouring which went into musicals appears largely exhausted, the format and spirit of musical revue is surely ripe for revival. Because they don’t write ’em like that anymore.  The wit, light-heartedness and sheer rhyming bravado of that glorious cannon, alas half-forgotten today, is absent from the depressing inanity that passeth as popular music nowadays. Popular culture being a far more accurate reflection of society than high culture, this is undoubtedly a sad indictment of our times. But many youngsters, dissatisfied with such barren fields, are rooting around, trying to pick up cultural threads that unjustly fell by the wayside. Ruby is clearly still bursting with energy and enthusiasm, so perhaps, if she is looking for a new venture, this would be the time to pass on her lifetime’s experience to a new generation of performers and the public, by moving into directing and producing, to put together a new revue for the twenty-first century... Are there any theatrical angels out there?...

For more about the incredible Thelma Ruby, click HERE. 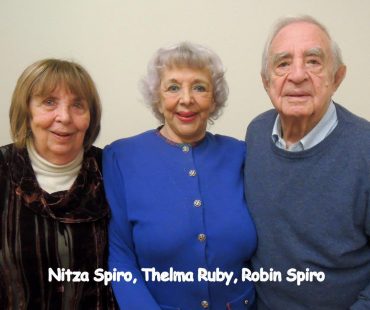 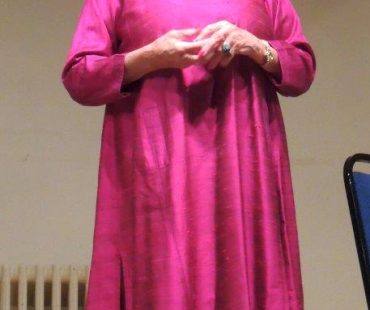 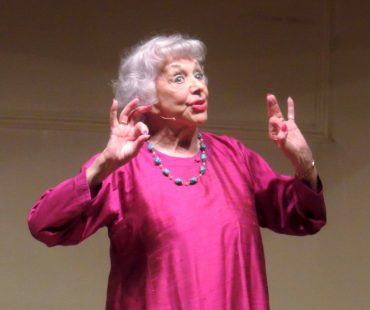 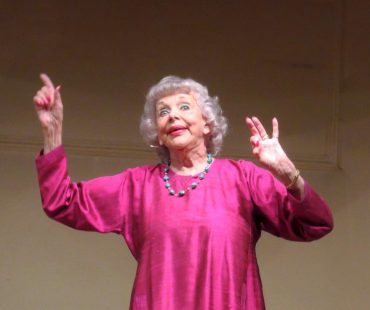 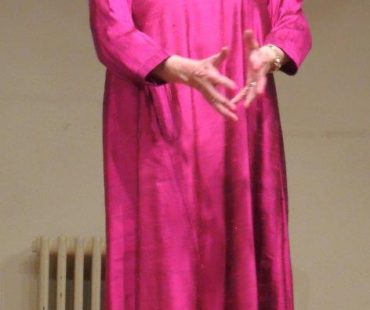 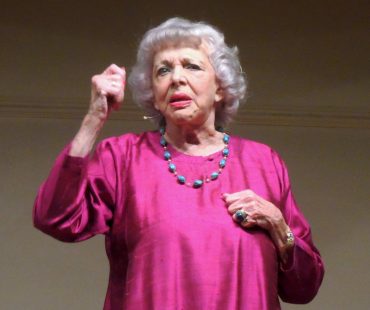 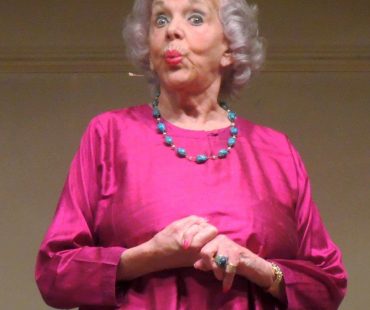 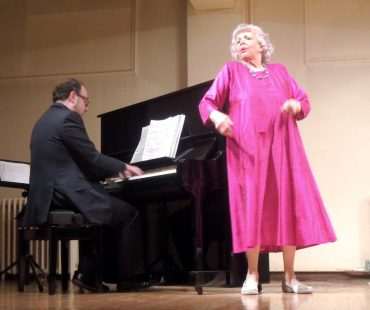 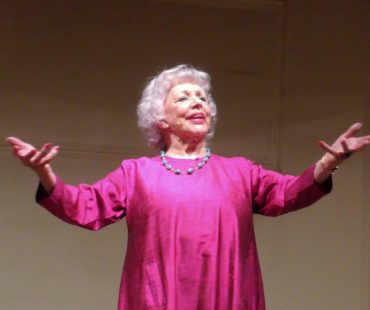 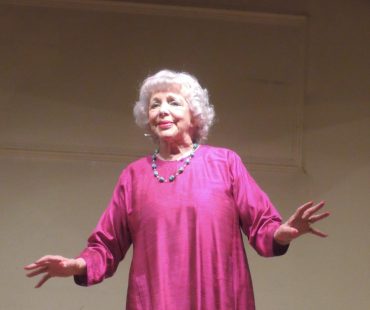 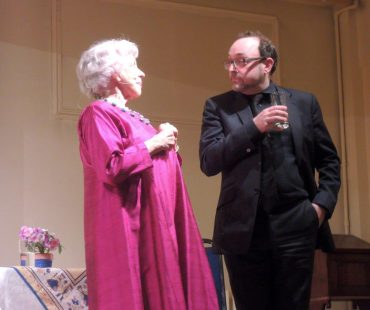 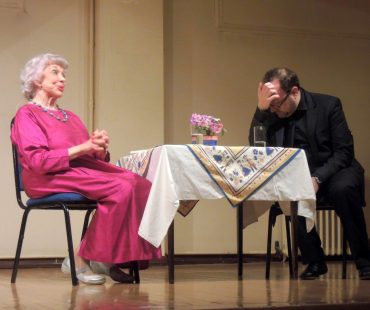 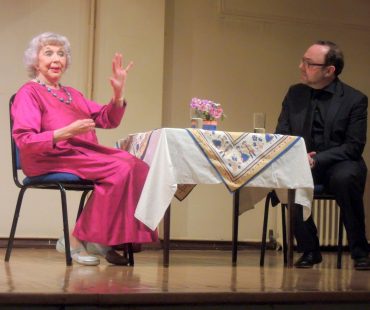 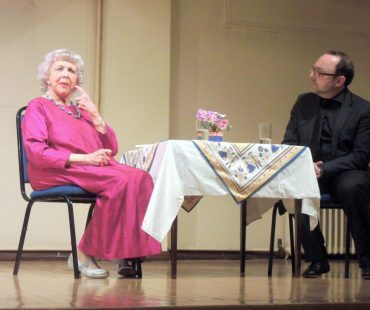 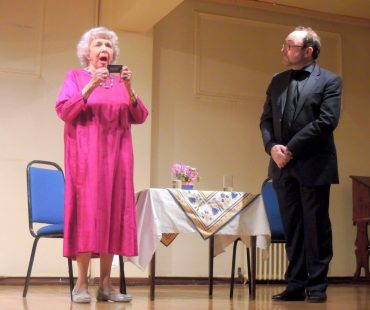 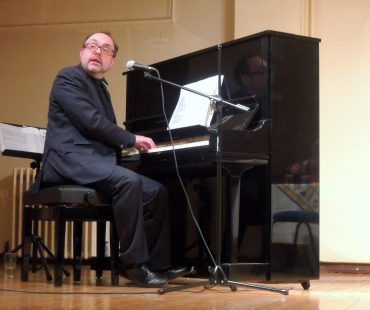 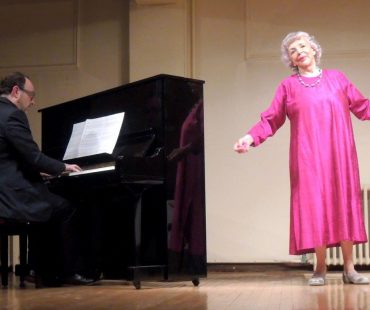 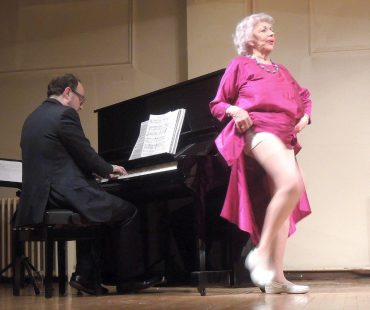 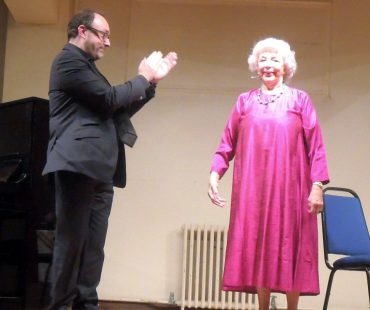 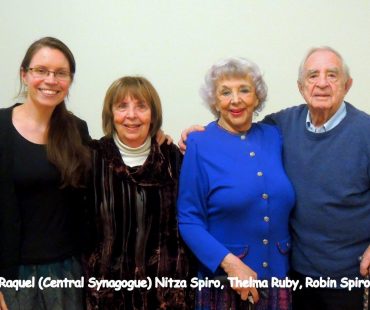