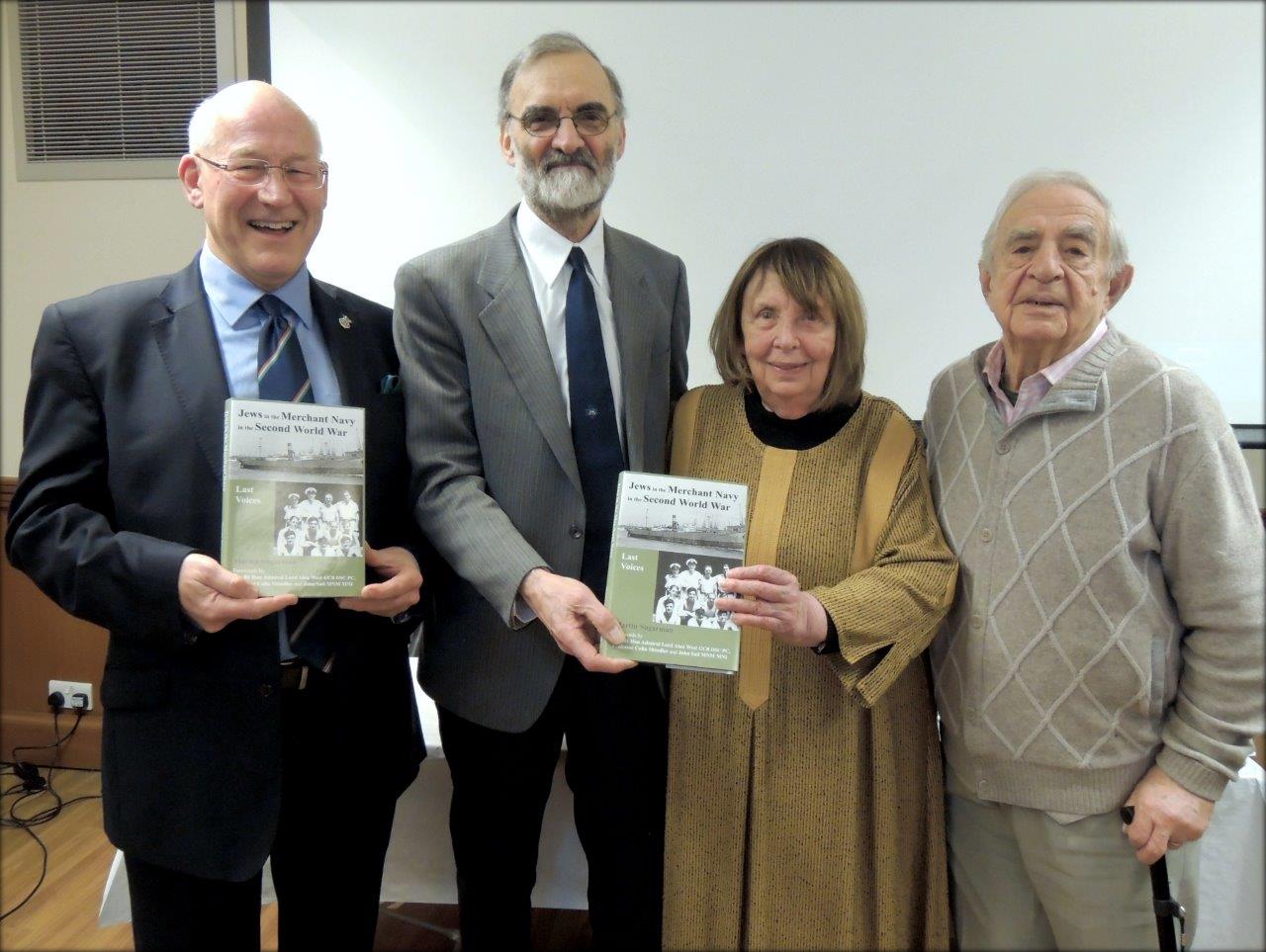 Standing room only was the order of the day – or, rather, the evening – at Norrice Lea Synagogue last Thursday, at the launch of Martin Sugarman’s latest, ground-breaking book, Jews in the Merchant Navy in the Second World War – Last Voices, published by Vallentine Mitchell. The book, like its forerunners, has been meticulously and painstakingly researched and is much more than a list of names, dates and other statistics. There are many photographs, testimonies and tributes, some of them fiercely heart-wrenching.

For me, the most poignant tribute was one from Reuven (Robert) Hochstädter, an Austrian Jew whose family emigrated to Palestine from Vienna in 1935, when he was 12 years old. He recounts that, when he arrived in Palestine, he “spoke no Hebrew and therefore had difficulty in finding friends to play with”, and that the only friend he did find was an older boy called Moshe (Konrad) Bein, whose family was from Hamburg, in Germany.

Reuven goes on to say that Moshe was “mad about the sea and everything connected with ships… His dream was to join a ship as a deck boy, to work himself up to become an officer, and [to] sail to see the world”. Unsurprisingly, Moshe’s parents were bitterly opposed to this, but he persisted and eventually overcame their resistance, becoming a deck boy on the SS Har Zion, a 2,500-ton merchant ship with a crew of 37 officers and men, of whom 17 were Palestinian Jews.

On the last day of August 1940, by which time 18-year-old Moshe was on the first rung of the promotion ladder and was an Able Seaman, the Har Zion was torpedoed by a U-boat and sank. Moshe and 35 of his fellow seafarers went down with the ship. The 37th, miraculously, survived. Exactly a week later, the Bein family was no more. Moshe’s parents, shattered by the news that their only child had been killed, had committed suicide by taking poison.

There are three forewords to this important and highly readable book. The first is by Admiral Lord West, GCB, DSC, PC, former First Sea Lord and Falklands War veteran, the second by Emeritus Professor Colin Shindler of the School of Oriental and African Studies, London University, and the third by Captain John M R Sail, National Chairman of the Merchant Navy Association.

Professor Shindler was seated next to Martin Sugarman, the archivist of AJEX (Association of Jewish Ex-Servicemen and Women), at the “top table” last Thursday evening, together with Robin and Nitza Spiro, the moving spirits of the Spiro Ark, who organised and hosted the book launch. The evening began with a talk by Mr. Sugarman about some of the Merchant Navy seamen mentioned in his book, enhanced by a slide show of photographs of some of them.

When he finished speaking, we were shown some more photographs, they were no different from those we had seen earlier, but they stirred our emotions and gripped our imagination even more than those we had already seen, because each one was accompanied by a voice recording of the man in the photograph. Hearing the voice of Glaswegian Henry Sless, for instance, was incredibly moving, especially because, as the book tells us, after the War, some villain stole his awards and medals.

Henry Sless was awarded the Distinguished Service Cross (the second highest award after the Victoria Cross) in 1942, for bringing the badly damaged SS Ohio, the largest oil tanker built up to that time (she was nearly four times the size of the Har Zion), into Valletta harbour from Gibraltar with her precious cargo of oil. As the book says: “The
arrival of the oil aboard the Ohio was a major turning point in the prevention of the fall of Malta”, whose stalwart population were awarded the George Cross for their courageous withstanding of a two-year Nazi blockade and vicious bombing campaign.

The voice recordings were followed by a talk by Captain Sail, which demonstrated his passionate determination that Merchant Navy seafarers’ heroism and self-sacrifice
during the Second World War would not only not be forgotten, but would be actively commemorated. Turning to Martin Sugarman, Captain Sail declared that the book would be an important factor in achieving his aim. Admiral Lord West had also been scheduled to speak, but, as luck would have it, he had unexpectedly been sent abroad on a mission and was therefore unable to do so.

A final comment – the Jewish heroes mentioned in Martin Sugarman’s book served not only in the British Merchant Navy, but also in the Merchant Navies of Commonwealth countries, as well as the United States and Norway, among others..