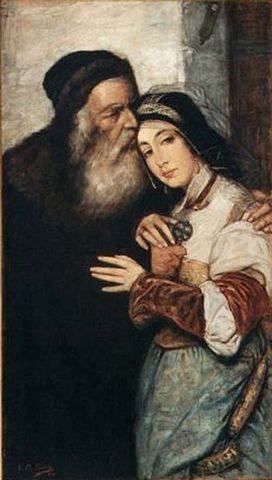 At the Spiro Ark by Law Lord Peter Millett.

Shylock was created by Shakespeare when Lopez, the queen's Jewish physician was falsely accused of attempting to poison the sovereign. The Earl of Essex provided the evidence and presided of the trial. Lopez had no way to defend himself and he was hanged, drawn and quartered for all to witness.
Could he be the trigger for the Shakespearean character in Christian Elizabethan England where anti Jewish feeling continued to prevail.

Every literary work is of course opened to contradicting interpretations each relying on quotations from the very same text.

The famous "Hath not a Jew eyes... If you pick prick us do we not bleed? ..." stresses the common humanity that lies beneath Shylock's exterior public image. But does this speech mitigate the accusations of Shakespeare's anti-Semitism.

There is a degree of anticipated audience empathy, to the fact that a persecuted person can reach the end of his tether and behave in a manner which seeks vengeance.

A Jewish proverb in the Mishnah maintains that a man's true character is revealed under three conditions: in his anger , when financial matters are concerned and when he is drunk. On two of these counts Shylock is seen as malignant, mean and murderous.

Prejudice in other Shakespeare's plays is also tested ambiguously: machoism in Taming of the Shrew, anti blacks when the Moor kills a white woman in Othello. But are these characters really evil or letting Shakespeare explore prejudice in society through them? Can they be seen as victims of society responding to a desire for vengeance after enduring prejudice against them? In such cases the demarcation between villains and victims becomes blurred.

Any defence lawyer today would no doubt bring to Shylock's revived trial the circumstances which caused this uncontrolled behaviour and as professional evidence would line up social psychologists. Shylock can be seen as someone who stands against hypocrisy of a false friendship, asking for revenge against the historical treatment of the Jew by endless generation fed on Christian anti-Semitism.

Shylock's attitude to his daughter escaping with the gentile, stealing his money is not different to many Jews who might sit Shivah (seven days of mourning after the death of a close relative) if their daughter acted in the same way. Thus we come to the trial scene in the play. How would Shylock be judged in a modern English Court?

Join this fascinating session which will look at the trial through the eyes of a famous lawyer. Is Shylock a villain or a victim? You could not have a better person to present the case than Lord Millett who is a former "Law Lord".

Herzl's Journey
What Would Herzl Think of Israel Today?
An Imaginary Conversation with Theodor Herzl on the 60th Anniversary of the State

Close your eyes and imagine you could join Theodor Herzl and travel through time to the great capitals of Europe.

In October 1902 Theodor Herzl wrote his utopian blueprint for his vision of the modern state of Israel.

Herzl Journey novel by Sir Bernard Zissman opens in a Viennese Caf��¦copy; with the hero being invited to travel in luxury to Palestine returning to find an independent Jewish state.

People looked upon Herzl's Altneuland as a utopian vision but Herzl himself considered that it was realistic and that through the variety of skills Jews possess, they would make the new yet old state blossom.

Herzl had a clear vision of what this state should be like. He presented a profound and clear vision of future events in the history of Jews. The new state in his vision would use advanced science and technology in order to reach world renowned standards. In this book he called for tolerance in all spheres including the what might become a volatile relationship between Jews and Arabs. The one Arab character in Altneuland is Reshid Bey who is one of the leaders of the new society. He is seen as being very grateful to his Jewish new neighbours for improving his standard of living and the economic conditions of Palestine and thus can find no cause for conflict. A place where Jewish culture would merge with the best of European culture, where a Palace of Peace would be built in Jerusalem arbitrating international disputes. He did not think of the state as a religious state but advocated respect for religion in the public sphere. Many languages would be spoken there and Hebrew not necessarily the main tongue.

All non Jews in the country in Herzl's prediction will have equal rights. An attempt of ultra orthodox rabbis to disenfranchise the non Jewish citizens of their rights fail in the democratic elections.

Sir Bernard Zissman has written his book imagining his accompanying Herzl in his European travels then and being with Herzl in present day Israel.

Sir Bernard Zissman was the winner of the Institute of Directors 2007 Non executive Director of the Year. He started his writing career with "Knight Out With Chamberlain". It is a conversation spanning a century going back in time with the author "meeting his most famous and illustrious predecessor", Joseph Chamberlain and then bringing him back into the 20th century to compare life in the regenerated city.
Sir Zissman's long and distinguished career as an elected Councillor in Britain's great industrial City of Birmingham culminating with his election as a Lord Mayor of the City.

During a busy political career Sir Bernard led the team which developed the international convention centre and the world acclaimed symphony hall home of the City of Birmingham Symphony Orchestra. More recently he led the team to put the foundation blocks in place for the Millennium Point.

Come, meet with the political and cultural figure of Sir Bernard Zissman and through the eyes of Herzl examine Israel today joining in the fascinating discussion. Books will be on sale.